Imām al-Bukhārī (no. 6933) relates from Abū Saʿīḍ al-Khudrī (raḍiyallāhu ʿanhu) in his Ṣaḥīḥ under the chapter heading: Whoever left fighting the Khārijites in order to maintain unity and to avoid distancing the people from himself. 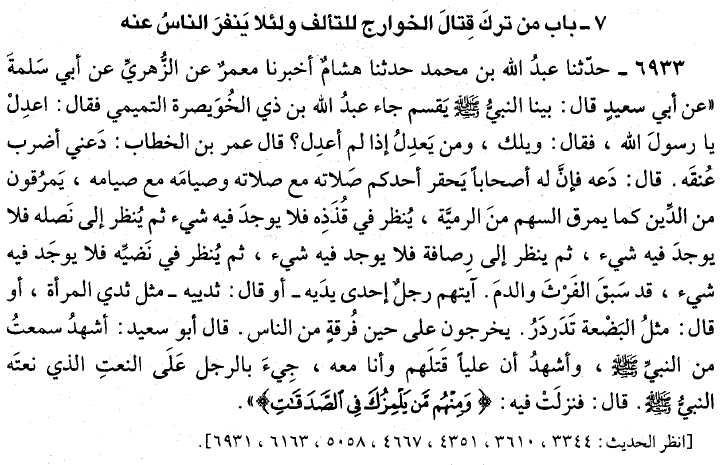 While the Prophet (ﷺ) was distributing (something, ʿAbd Allāh bin Dhul-Khuwayṣirah al-Tamīmī came and said, “Be just, O Allāh's Messenger!” The Prophet (ﷺ) said, “Woe to you! Who would be just if I were not?” ʿUmar bin al-Khaṭṭāb said, “Allow me to strike his neck! “The Prophet (ﷺ) said, “Leave him, for he has companions, and if you compare your prayers with their prayers and your fasting with theirs, you will look down upon your prayers and fasting, in comparison to theirs. Yet they will pass through the religion just as an arrow passes through it’s target’s body in which case, if the feathers of the arrow are examined, nothing will be found on them, and when its arrowhead is examined, nothing will be found on it; and when its sinew is examined, nothing will be found on it; and then its shaft is examined, nothing will be found on it. The arrow has been too fast to be smeared by the internal contents and blood (of its target). The sign by which these people will be recognized will be a man, on one of his arms – or he said breasts – will be [a growth] like the breast of a woman or like a moving piece of flesh. These people will appear when there will be a split between the people.” Abu Saʿīd [al-Khudrī] added: “I testify that I heard this from the Prophet (ﷺ) and also testify that ʿAlī killed those people while I was with him. The man with the description given by the Prophet (ﷺ) was brought to ʿAli. The following Verses were revealed in connection with that very person (ʿAbd Allāh bin Dhul-Khuwayṣirah al-Tamīmī): ‘And among them are men who accuse you (O Muḥammad) in the matter of (the distribution of) the alms’. (9.58).”

From this ḥadīth are certain numerous points that should be remembered and not ignored: